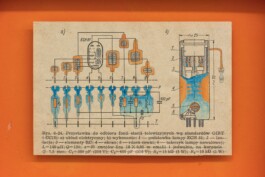 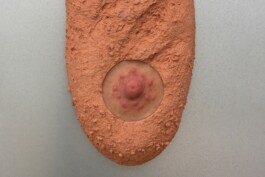 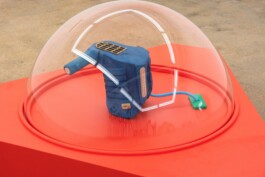 Amber Waves (Bursztynowe Fale), is a solo exhibition of new works by Polish artist Rafał Zajko. Through a new series of experimental sculptures, installations and works on archival paper, Zajko explores the relationship between human life and our cultivation of grain. The symbolism of wheat and grain has been of ongoing interest in the work of Zajko, stemming from his working-class upbringing in Poland where his family were employed for generations by either factory or field.

In this exhibition, Zajko departs from an autobiographical approach to consider the detrimental ecological consequences of factory farming, the technology we have created to enable large-scale wheat production and to ultimately question whether, since its domestication 10,000 years ago, this mega crop has actually cultivated us into our complete societal dependence on it.

‘I like to think of it as an alien plant’, says Zajko, ‘something we genetically modified from its hostile origin that is now in 70% of global food production, but in equal measure something that modified us, a process still ongoing as our bodies continue to learn how to fully digest it.’

Paying homage to the gallery’s site, a former bakery, Zajko transforms each floor of the space into environments that allude to elements of post-harvest processes––such as filtration, production, consumption and pollution. Throughout the space, the featured works draw parallels between the cyclical nature of these processes with the biological systems of the body.

In the basement, viewers enter the ‘filtration chamber’ where they are confronted by several freestanding ‘Syphon’ sculptures. Almost life size, their anthropomorphic character does not just recall the body in form but also in process as synthetic urine thaws from frozen casts and collects in the ceramic conduits/organ imitations beneath, before being excreted onto copper panels below.

The anthropomorphic nature of these works continues on the ground floor, where viewers encounter Prometheus, a vivid green wooden wall relief. Within a transparent dome we see a rotating ceramic loaf evoking real time production as if in a mechanical womb. Its apt mythological title draws parallels between Prometheus’ role as the creator of human life, with that of grain itself, which once cultivated saw humans advance from nomadic hunter gatherers to settled farmers which in turn allowed the freedom for an advanced society to develop.

Ruminating on the technological design engineered to facilitate wheat cultivation and the effect of such creations on global warming, the top floor of the gallery becomes a chimney of consumption via a monumental floor based wooden domed relief. Entitled Eartheater, this monument to industry contains within it a bright blue log that both exhales and inhales smoke symbolising the tandem ability to cleanse the pollution it releases. In this way the work acts as a metaphor not just for bodily function but human action, our collective ecological damage and responsibility to ensure sustainable solutions for both agriculture and the world at large.